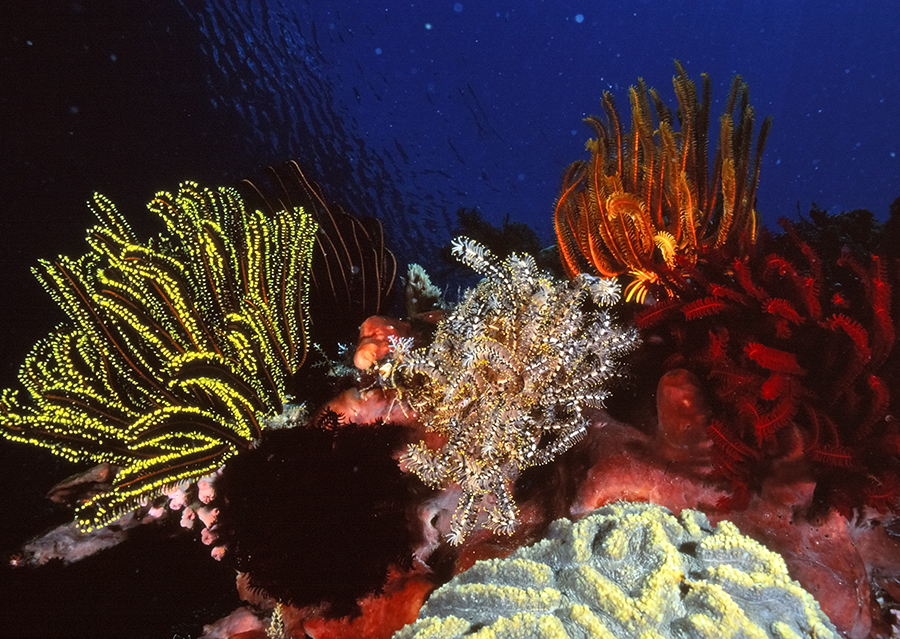 Manado City is located on the northern tip of the island of Sulawesi and serves as the gateway to the Bunakan Marine Conservation Park created in 1986. This biologically rich marine environment has developed into a popular tourism destination for divers from around the world. Manado is the largest city in Northern Sulawesi Province and serves as home base to a number of comfortable diving operations and several international hotels. Services vary depending on each individual diving center, and information on most of these can be accessed through the internet.

The marine park includes five islands plus the marine area of  Dugong and the northwest tip of Sulawesi. Visitors dive all these locations, but the majority of the diving is centered along the reefs surrounding the island of Bunakan. There are at least a dozen sites named and described in various pieces of literature that make up most diving itineraries. Here are my interpretations of the best of these. 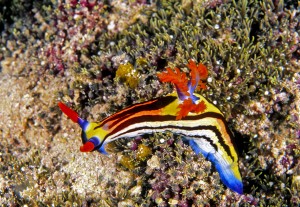 Lekuan II is a nice area to start your diving adventure. It’s one of the calmest areas on the island and a good place for newcomers to become acquainted with the marine flora and fauna found around the island. The wall there drops off in stepped layers, each covered with different coral textures to enjoy. It’s also rich in fish, nudibranchs and invertebrate growth. 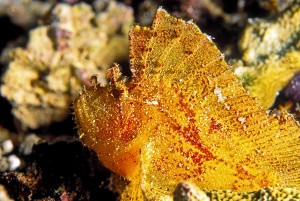 Alung Banus is another easy dive area. There’s a small cove there that offers protection from the current. This is a good spot to find leaf fish, also sometimes called leaf frog fish or leaf scorpion fish. The cove isn’t the most colorful area though, so after checking it out I like to turn to the south and pick up the current running down the island to the east. This wall is a terrific spot to find a variety of nudibranchs, and it also features a population of ornate seahorses.

Mandolin Point is one of the most popular spots on the island. It’s at the tip of a reef extension jutting out between Bunakan and Manado Tua Islands. This is one of the best fish viewing locations and one of the best spots to find schools of barracuda. There are several giant clams imbedded on the sea bottom there and good numbers of gorgonian fans. The current often runs strong along the channel between the two islands, and that can be exciting. If you don’t want to take that wild ride you can work back along the reef structure towards the center of the island. Remember, most dives are drift dives, and the boat will pick you up wherever you surface after your dive.

Depan Kampung is located along the western shore of the island nearest to Sulawesi. I love this dive. When the current’s running it’s one of the wildest rides you’ll find anywhere. Drop down between 20 and 40 feet, get neutral, and be prepared to fly. The wall here features excellent gorgonians, outstanding varieties of fish, and a good mixture of invertebrates. 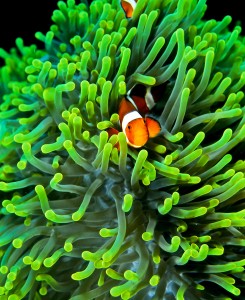 Timur East is a slightly more shelving wall along the shore facing Sulawesi. The current can fly here too, but not on a regular basis. This spot has good anemone populations inhabited by a variety of colorful clownfish.

Sachiko Point is located along the north eastern corner of the island. This spot is famous for a structure dubbed “crack-in-the rock” that contains schooling bait fish called silver sweepers inside the crack and larger predators outside waiting for a meal. The wall there is quite pretty featuring a sharp drop off into blue-black depths where it’s not unusual to see a shark or two.

There are a number of other great dives at Bunakan, but the ones listed above are my favorites. If you want to visit any of these you can usually ask you guide and they will oblige. We’ll visit some of the other islands in future blogs. I love Manado, and if you go there I think you will, too.

Otto Gasser grew up mostly in southern California and obtained his Doctorate In Educational Psychology from the University of California at Los Angeles (UCLA). He was hired as a professor to teach in the Department of Kinesiology and Health Sciences at California State Polytechnic University, Pomona, California, where he initiated a multilevel Scuba training curriculum on campus. Dr. Gasser spent 37 years at Cal Poly before recently retiring. During that time, he certified over 2,000 students in Scuba. He served as the University’s Diving Safety Officer and represented the campus on the California State College and Universities Diving Safety Committee. Off campus, Dr. Gasser spent ten years on the Board of Directors for the Los Angeles County Underwater Instructors Association, three of them as President. Over the years, he has volunteered time on a number of county Scuba training programs and has authored several articles about diver training. Otto is now an active recreational diver. In addition to the California coast, his more frequently visited dive locations include Hawaii’s Big Island, Indonesia, and the Caribbean islands.
View all posts by Otto →
This entry was posted in Indonesia and tagged Bunakan, Frog fish, Indonesia, Nudibranchs, scuba diving, Sulawesi. Bookmark the permalink.