Catch Up Time on the Blog with Hawaiian Nudis 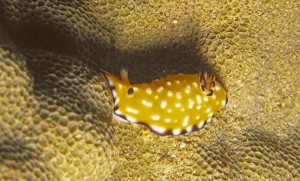 Here on the mountain we’ve had three and a half feet of snow and been without power for three days during the past week. Candlelight suppers aren’t all that bad though, and things are cool now.

I figure with the runoff and swell in the bay, diving sucks, so I’ll just tell you a little story.  Have you ever been diving during an earthquake? Once, on the big island of Hawaii, my partner and I were trying to photograph different nudibranchs in 90 feet on an underwater lava ledge off the Kohala Coast. The visibility was great, but the sea slugs weren’t cooperating.

After finishing the dive and admiring all the other different creatures we would have liked to have recorded on film, we hiked back to the car and headed to Kohala Divers to have our tanks filled. That’s when we found out there had been a mild earthquake, about 4.0. That explained the reduction in visibility and the creatures crawling out of the cracks in the wall. Still, if no one had told us there’d been a quake we’d have never guessed.

It‘s hard to imagine what it would have been like underwater during a big one, and I won’t even think about a tsunami. In retrospect it was an interesting experience, one I magnified and used in my second book, Sunken Graves.  If you’ve had a similar experience I’d love to hear about it, drop me an email.

New blog will be coming next week, and we’ll get back to talking about diving as long as the power doesn’t go out again. Think halibut hunting along the beach, it’s becoming that time of the year.

Otto Gasser grew up mostly in southern California and obtained his Doctorate In Educational Psychology from the University of California at Los Angeles (UCLA). He was hired as a professor to teach in the Department of Kinesiology and Health Sciences at California State Polytechnic University, Pomona, California, where he initiated a multilevel Scuba training curriculum on campus. Dr. Gasser spent 37 years at Cal Poly before recently retiring. During that time, he certified over 2,000 students in Scuba. He served as the University’s Diving Safety Officer and represented the campus on the California State College and Universities Diving Safety Committee. Off campus, Dr. Gasser spent ten years on the Board of Directors for the Los Angeles County Underwater Instructors Association, three of them as President. Over the years, he has volunteered time on a number of county Scuba training programs and has authored several articles about diver training. Otto is now an active recreational diver. In addition to the California coast, his more frequently visited dive locations include Hawaii’s Big Island, Indonesia, and the Caribbean islands.
View all posts by Otto →
This entry was posted in Hawaii and tagged Earthquakes, Hawaii, Nudibranchs, scuba diving. Bookmark the permalink.