We took advantage of a fine break in the weather a couple of weeks ago and took a quick trip to Jade Cove.  We noticed a couple of changes there, so this is an update of our November/December blogs.

First, the Jade Cove sign on the highway marking the south cove is gone — now neither cove has the path to the beach clearly identified with a road sign.  Second, the paths to both the north and south cove are the same, but the stiles over the fence are gone, and so is the fence.  The paths are easy to find, however, with the north cove path just across from the south end of Plaskett Creek Campground, and the south cove path about 200 yards south of that where there is a wide dirt shoulder area to park.  Finally, the campground has new and much improved toilet facilities, which is another recent update.  Other than that, it’s still the same rustic and beautiful place it’s always been. 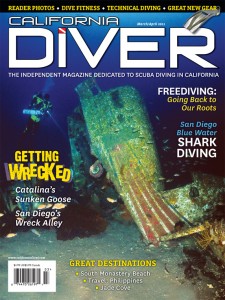 The full text of the Jade Cove Dive Log is published as an article in the new (March/April) issue of California Diver Magazine, which features Jade Cove as one of California’s great diving destinations.  There are also several terrific pictures of the cove included in the article.  The magazine should be available at local dive shops this week, or you can access their website (www.californiadiver.com) for subscription information or to purchase a single copy.

And here’s the map that goes with that article:

Otto Gasser grew up mostly in southern California and obtained his Doctorate In Educational Psychology from the University of California at Los Angeles (UCLA). He was hired as a professor to teach in the Department of Kinesiology and Health Sciences at California State Polytechnic University, Pomona, California, where he initiated a multilevel Scuba training curriculum on campus. Dr. Gasser spent 37 years at Cal Poly before recently retiring. During that time, he certified over 2,000 students in Scuba. He served as the University’s Diving Safety Officer and represented the campus on the California State College and Universities Diving Safety Committee. Off campus, Dr. Gasser spent ten years on the Board of Directors for the Los Angeles County Underwater Instructors Association, three of them as President. Over the years, he has volunteered time on a number of county Scuba training programs and has authored several articles about diver training. Otto is now an active recreational diver. In addition to the California coast, his more frequently visited dive locations include Hawaii’s Big Island, Indonesia, and the Caribbean islands.
View all posts by Otto →
This entry was posted in Jade Cove Diving Log, Uncategorized and tagged jade, Jade Cove, northern California diving, scuba diving. Bookmark the permalink.