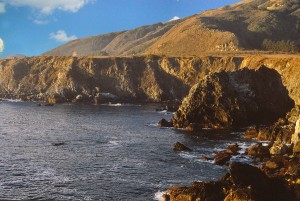 If the surf is down you can take a faint trail down to the shoreline just south of the point of land separating the two coves, and then you can start your dive there.  It’s a rocky entry, but an easy one if it’s calm.  Many people like this option because if your goal is to dive off this point, starting here eliminates the longer swim out from the south cove.  Another popular option is to start here and work back to the north cove and exit there.  This allows you to cover a lot of ground without backtracking over the same areas twice.

On calm days you can make the longer walk out to Plaskett point between Sand Dollar Beach and North Jade Cove, and then make your way carefully down the rocks to the water along the south side of the point.  The entry is a giant stride off of a rock on the shoreline.  It’s much easier to get into the water here than it is to get out, but an exit is possible if you’re careful.  If you want to try this option I’d plan on making a one-way dive into the north cove and exiting there – that’s much easier.  This area is popular with people who want to spearfish hunt for the many rockfish, ling cod, and cabazon that frequent the rocky crevasses in between the larger boulders found here.  This is also a nice place to have a beer or a glass of wine and watch the sunset at the end of the day.  You’ll see an occasional sea otter swimming between the point and Plaskett Rock, and when the gray whales are migrating they’ll spout nearby.

There’s a short road down to the beach just north of the bridge that crosses the creek, and there’s a small parking lot that provides easy access to this area.  Divers have collected jade working through the rocks outside the creek, but for me it’s not been nearly as productive as diving at either of the north or south coves.  However, when the surf is up this is another area where you can comb the beach looking for jade.  We used to suit up in our wet suits and walk along the shore all the way back to the south cove.  There are a couple of tricky spots if the swell is really booming, but otherwise it’s a piece of cake, and occasionally we were rewarded with a nice piece of jade.

I’ve never found jade along this sandy stretch of shore, but I’ve enjoyed some pleasant strolls here after finishing my diving day.  There’s often a group of people here who drive to the top of Plaskett Ridge Road and then hang glide down to land in this day use area.  They’re fun to watch, and it’s another good way to end your day.

If you run out of air, or just get tired of sitting around in the campground, here are a couple of other things you can do that you might find interesting.  These activities can also be utilized by non-diving friends who might get tired of watching your bubbles while they beach comb for jade.

This classic restaurant is located an hour’s drive north of Plaskett Creek Campground and it’s an excellent place for lunch or dinner.  Their burger and basket of fries are to die for, and if you’re not driving their Irish coffee will warm you on a cold day.  You can also while away a few hours exploring the Big Sur area before or after dining.  There are also excellent camping facilities at Big Sur. 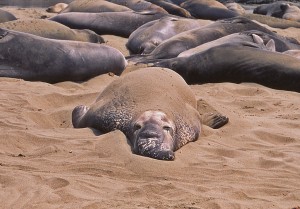 A face only a mother could love

There’s a large population of elephant seals that hang out along the shoreline near the lighthouse here.  You can watch them on the beach and maybe see them playing, mating, or fighting at different times.  They make good photography subjects, and it’s a fun way to spend some leisure time.  The lighthouse is south of Jade Cove and north of Cayucos.  It’s along Highway 1 after you leave Morro Bay, and it’s located about a third of the way to Jade Cove.  If you’re driving up from the south you can stop here on the way to or from your trip, too.

This popular tourist spot is also located north of Cayucos along Highway 1, and it’s just a few miles south of the Piedras Blancas Lighthouse.  There are a number of different tours daily that feature the fascinating history of Hearst Castle, and you can’t go wrong with this option.

These are just a few of the many tourist options that you can enjoy to supplement your dive trip to Jade Cove.  There are also numerous other things to do, it all depends on your personal tastes.  The cove is an excellent and different area to dive, and the surrounding areas offer many other things you can enjoy.  If you haven’t tried diving Jade Cove before I recommend that you put it on your agenda for the near future.

Otto Gasser grew up mostly in southern California and obtained his Doctorate In Educational Psychology from the University of California at Los Angeles (UCLA). He was hired as a professor to teach in the Department of Kinesiology and Health Sciences at California State Polytechnic University, Pomona, California, where he initiated a multilevel Scuba training curriculum on campus. Dr. Gasser spent 37 years at Cal Poly before recently retiring. During that time, he certified over 2,000 students in Scuba. He served as the University’s Diving Safety Officer and represented the campus on the California State College and Universities Diving Safety Committee. Off campus, Dr. Gasser spent ten years on the Board of Directors for the Los Angeles County Underwater Instructors Association, three of them as President. Over the years, he has volunteered time on a number of county Scuba training programs and has authored several articles about diver training. Otto is now an active recreational diver. In addition to the California coast, his more frequently visited dive locations include Hawaii’s Big Island, Indonesia, and the Caribbean islands.
View all posts by Otto →
This entry was posted in Jade Cove Diving Log and tagged jade, northern California diving, scuba diving. Bookmark the permalink.