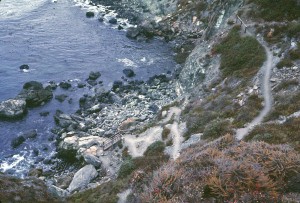 The south cove access is next to the Jade Cove sign on the highway.  Park there and climb over the style to reach the path, and then continue down to the cove.  Again, winter storms affect the pathway along the cliff down to the cove.  Check this out before making your dive plan.

The safest entry is from the pebble beach north of the trailhead.  That’s marked as area H on the map.  You can dive and find jade anywhere from just outside the surf line on out into deeper water inside the south cove’s boundaries.  These extend between the point of land to the north and all the way across to the point of land to the south.  Start hunting in the shallower water in front of the pebble beach and work your way out, or swim out and pick another area to tie off your float and start your search almost anywhere.  I usually begin in the shallower areas because they get stirred up more by the winter storm surges that periodically move through both coves.  If that isn’t paying off, then I’d move deeper.

I’ve done very well at times staying close in and pawing through the gravel patches between the heavier rocks in shallow water on both sides of the small bay in front of the entry point.  I also like to work in the shallower inshore waters to the south and out towards Area D.  Area D itself is deeper with large boulders in places, but it shallows and fans out into pebbles and gravel if you keep working further to the south, and I’ve found that area to be very productive at times.  Area E extends out northward towards the point that separates the two coves, and if there is little or no swell, it can also produce well.  Again, I like the shallow gravel patches just off shore the best, and after working those you can extend out deeper off the north point.  Diving off this point is actually outside the boundaries of the south cove, but it has consistently been a good place to look for jade.  Area F is much deeper and extends seaward outside middle rock, and this is where some of the largest pieces of jade have been taken.  Early divers used to float these “hunks” down to Willow Creek and then haul them ashore using a bumper winch.  The middle rock in the center of the cove is worth a look.  There’s a small tunnel running along its inside edge, and if you rub the base of the rock with your hand you’ll expose a huge vein of jade that makes up part of the rock’s foundation.  Just like the vein in the north cove its way to big to do anything with, but its still fun to look at.  When large swells uncover new pieces of jade from time to time you’ll never know exactly where the best sites will pop up.  I used to alternate searching all of these areas at different times, and that often paid dividends.  My advice to you is to keep moving until you find an area that holds some pieces of jade, and then slow down and work the bottom around there.  That tactic worked best for me, and hopefully it will pay off for you as well.

Tune in next week for other points of access at Jade Cove and a short list of other adventures and places to visit nearby.

Otto Gasser grew up mostly in southern California and obtained his Doctorate In Educational Psychology from the University of California at Los Angeles (UCLA). He was hired as a professor to teach in the Department of Kinesiology and Health Sciences at California State Polytechnic University, Pomona, California, where he initiated a multilevel Scuba training curriculum on campus. Dr. Gasser spent 37 years at Cal Poly before recently retiring. During that time, he certified over 2,000 students in Scuba. He served as the University’s Diving Safety Officer and represented the campus on the California State College and Universities Diving Safety Committee. Off campus, Dr. Gasser spent ten years on the Board of Directors for the Los Angeles County Underwater Instructors Association, three of them as President. Over the years, he has volunteered time on a number of county Scuba training programs and has authored several articles about diver training. Otto is now an active recreational diver. In addition to the California coast, his more frequently visited dive locations include Hawaii’s Big Island, Indonesia, and the Caribbean islands.
View all posts by Otto →
This entry was posted in Jade Cove Diving Log and tagged jade, northern California diving, scuba diving. Bookmark the permalink.