Salmon and Halibut Fishing at the Queen Charlotte Lodge: 2015 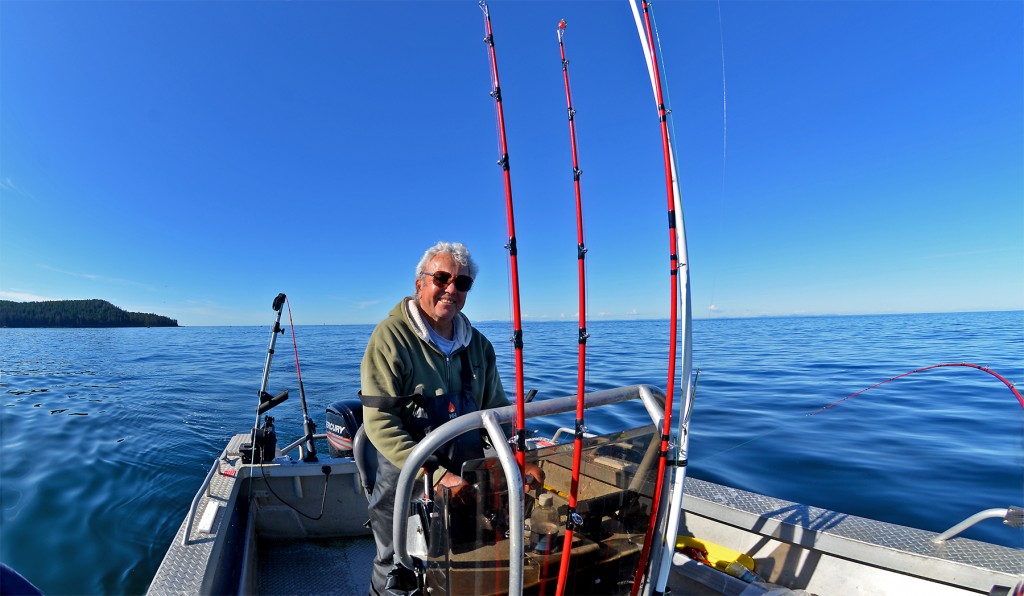 We just returned from our annual Canadian salmon fishing trip for 2015.  This year we were at the Queen Charlotte Lodge for the second year in a row. We had good travel connections both ways. You fly to Vancouver, catch an early chartered jet the next morning to Masset on Haida Gwaii (formerly Queen Charlotte Island), and then take a 12 minute helicopter ride to the Lodge, (the reverse on the way home). We opted for the four day fishing package to maximize our chances. You arrive at the Lodge before 10:00 am on the first day, enjoy a quick brunch and orientation, and then you start fishing. This year we paid for a half-guided trip (last year we went off on our own). Both times we’ve stayed on the MV Driftwood, a nicely refitted tugboat operated by the Lodge that sleeps 14 passengers, and it’s anchored right on the fishing grounds. The Lodge ashore is more of a resort and it’s plush with a few extra amenities if that’s what you like, but it’s at least a 30 minute trip each way from the Lodge docks to the fishing grounds. The crew on the Driftwood were great, the food was excellent (but breakfast is pretty light), and you can fish as long as you like. That fits our style.

This year we fished with a guide for the first two days and we weren’t disappointed. Cole was enthusiastic, knowledgeable, and worked hard to get us fish, and I understand the rest of the guides do the same. You’ll pay $400 a day extra for that guide service, but if you haven’t fished downrigger style before, or if you want to save most of your energy to fight the fish, it’s worth it. We opted for a guide because fishing is hard work, and two days on our own was enough individual effort for this trip. Guides are also limited to 11 hours of fishing daily, but you can stay out longer if you are on your own. Boats, fishing gear, bait, and advice are free no matter which way you go. Fish cleaning and freeze packaging is also free unless you opt for individual one-pound-cut portions. You pay extra for that service, but it’s worth it when you get home and find that you don’t have to cut or repackage your fillets. 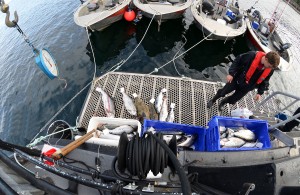 This year we choose a later date for our trip, the first week of September. That didn’t work as well for us because the usual late Coho run didn’t happen this year, and the King salmon bite had slowed down by the end of August. But we still returned home with almost 150 pounds of mixed fillets. I would recommend fishing in this area from late June through mid-August if possible; traditionally it’s a better time of the year for Kings. The fish limits per person this year were the same as last year.  There is a daily possession limit of four salmon, two of which can be Kings.  The total take limit for salmon is eight fish, four of which can be King salmon. Two fish is the take limit for halibut, but none can be over about 60 pounds and only one fish can be in possession per day. Rockfish limits varied. You can buy your Canadian fishing license and check the limits online before your trip. 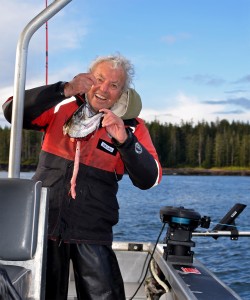 I got the head, but the sea lion got the rest of the fish

Last year we filled our cards on King salmon and halibut in late June, but Coho were scarce. Our biggest King last year was 33 pounds. This year we bagged four kings and the largest was 25 pounds. We also limited on halibut, averaging a little over 10 pounds each, and rockfish were plentiful. Pam scored a 15 pound yellow-eye as the biggest rockfish we caught. There were a few Coho around, and we caught some, but they weren’t as plentiful as we expected this late in the year. Maybe they will return again next year?  We also lost two nice Kings to sea lions this year for the first time —bummer, but that can happen wherever you go.

We always enjoy our Canada trips and this year was no exception. The food at the Queen Charlotte Lodge is excellent whether you are staying on the Driftwood or staying at the Lodge, the staff always treats you very well, and the fishing is good although it varies from year to year and depends a bit on the season. No one can predict the weather, and so far we’ve caught calm seas half of the time, but some wind and rainy days, too. All-in-all, the Queen Charlotte Lodge still runs an excellent operation and we recommend it if it fits your budget. The staff is top notch, and they work hard to keep you happy. The fishing grounds are generally productive and always scenic with plentiful humpbacks and occasional orcas, and bald eagles flying overhead. Try it if you get the chance; we think you won’t be disappointed.

A Fishing Cabin on the Smith River 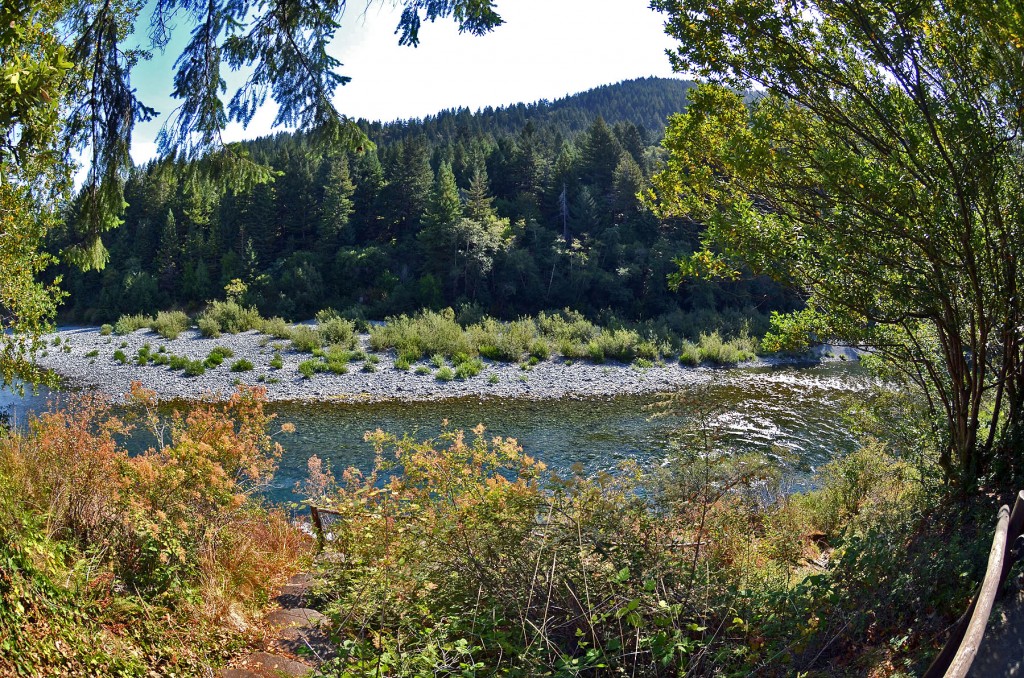 A view of the Smith River at our rental cabin

We were looking for a cabin rental in or near Crescent City for a recent botany trip and Pam found us a lovely place about 10 miles inland from Crescent City off Highway 199, right alongside the Smith River. The main cabin had a large bedroom with a king sized bed; two smaller bunk beds were in a smaller side room. There was another smaller adjacent cabin on the same property fitted out with a double bed and three more bunks. 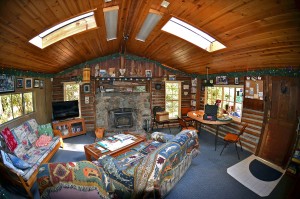 The living room of the main cabin also had two sofas so the rental will handle a crowd if necessary. There were two television sets in the main cabin, books and games in cabinet drawers, a well-appointed kitchen stocked with an oven, refrigerator, microwave, and every utensil you would ever need, and a washer and dryer enclosed on a small back porch. 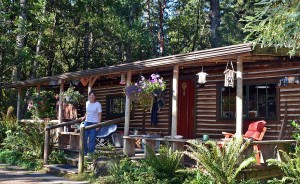 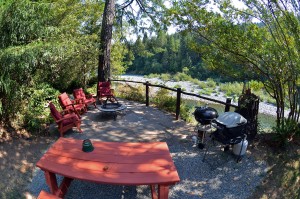 The main porch was open, faced the river, and included a large hot tub and comfortable lounging chairs. Across a small lawn there was a fire pit/barbecue patio set up so you could look directly down onto the river. Floating and fishing equipment and a canoe were also available for use if one desired. In short, this turned out to be a great place to spend a week, which we did.

The basic rental fee is $800/week for the first person, plus $30/night or ($150/ week) for each additional guest. You can contact the owners, Bill and Renee, thru their website at www.ourcabinontheriver.com/ for more information or to book a stay. During salmon and/or steelhead season, this would be an outstanding place to stay for a fishing trip with its two, short trails that lead directly from the property down to the river, both emptying out near large, deep fishing holes.

It wasn’t fishing season while we were there,  so our focus was more on botany and hiking many of the nearby trails, including those in nearby Jedediah Smith Redwoods State Park. 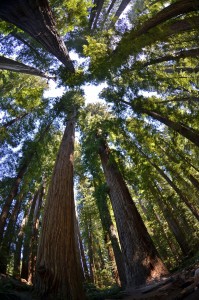 The Stout Grove of redwoods in Jedediah Smith State Park

We enjoyed looking around the nearby botanical preserves in the Six Rivers National Forest for rare plants that only occur on serpentine soils, but we also liked hiking along other trails that featured huge redwood groves and clusters of other different plants such as the California pitcher plant (also called the Cobra Lily or Darlingtonia). 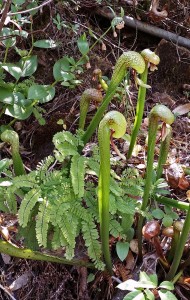 Cobra lilies and five-fingered ferns along the Stony Creek Trail

Nearby trails in the Toloway Dunes State Beach Park, just north of Crescent City, were flat and fun to explore, and ended in beautiful secluded beaches with stunning coastal views. Information on trailheads can be found on the web, or at nearby information centers, and we recommend that you do some homework before arriving to help with your itinerary. 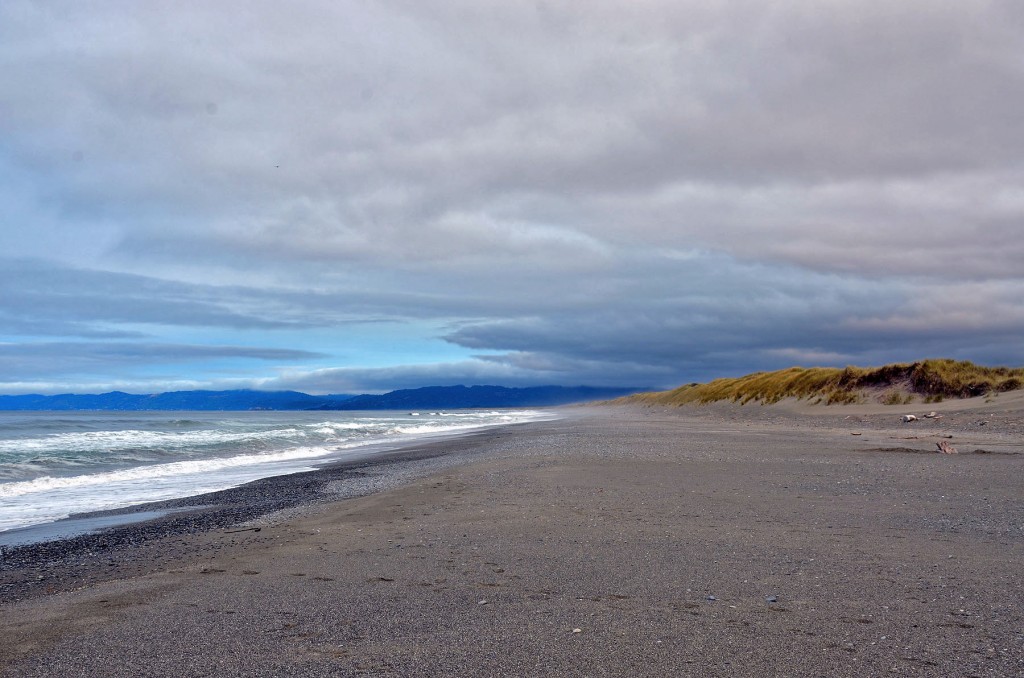 This section of northern California lies just below the Oregon border and it’s a beautiful and scenic place with a lot of variety to offer visitors. We even took a day off from hiking and went fishing in the ocean, and you can find that post in our last blog under Crescent City Sportfishing (August 8, 2015). This rental proved to be comfortable and well-located for us, and it more than met our needs and expectations. If you’re passing thru this area, and looking for something more than an overnight lodging, we highly recommend this river cabin as a place to stay. 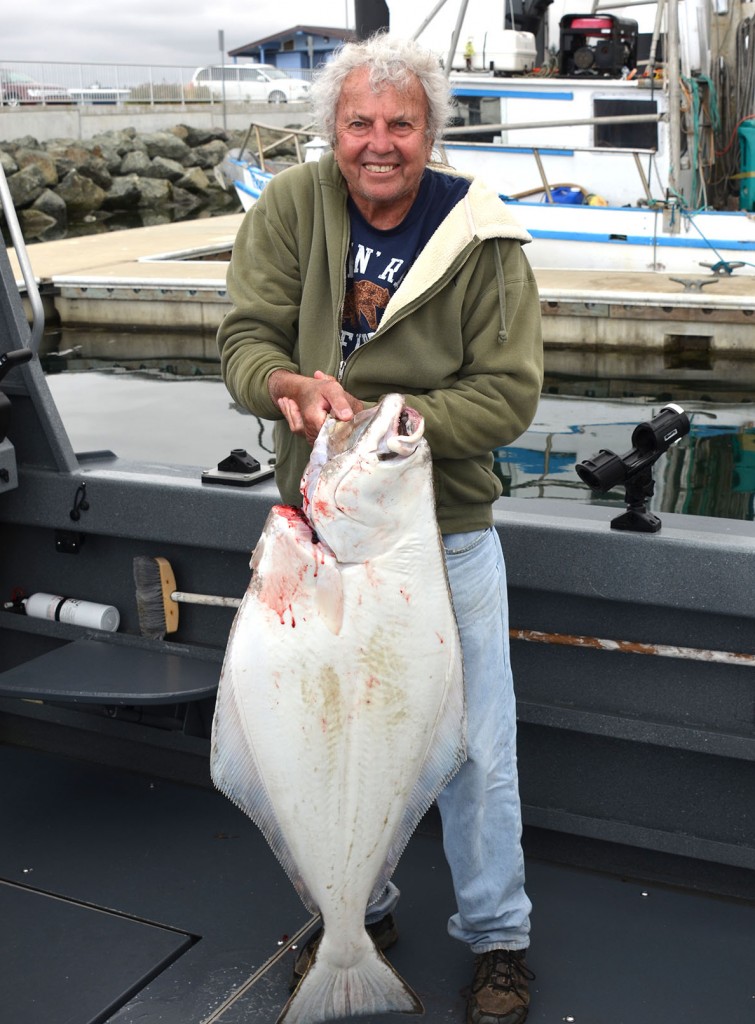 On a recent trip to the Smith River in northern California, we decided to spend one day fishing at sea for halibut on a boat out of Crescent City. The 30 foot Weldcraft Cuddy King we chartered for the trip was named the Shannon L’Ree. 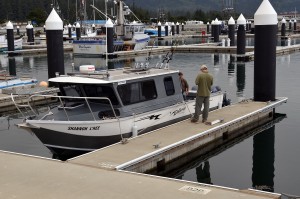 It is a well-appointed vessel that is owned and operated by Captain John who fishes during the summer months out of Crescent City harbor. John can be contacted through his web site at www.hardcoresportfishing.com. The boat will go after salmon, halibut, rock fish, or tuna; it’s your choice. John takes four passengers for an eight-hour trip, but the boat can handle five if that’s the size of your group. The charter fee is $150 per person for a salmon or halibut trip, and $110 per person to go after rock fish. Prices for tuna fishing or just a harbor cruise are listed on his website as well. 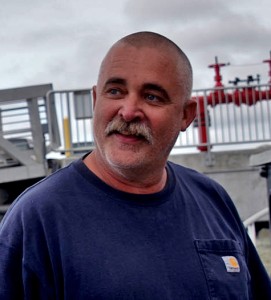 John supplies all the gear and bait for each fishing trip at no extra cost. At the end of the trip, he will clean your catch too, so bring a cooler for the drive back home.

If you’re looking to charter a trip out of Crescent City, we highly recommend Hard Core Sportfishing. We found John to be a very knowledgeable and gracious host with a first class operation. His fishing equipment was more than adequate for the task, and he even brought along his dog Rudy for you to pet in your spare time. 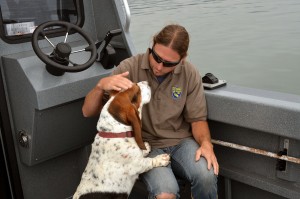 Rudy encourages such attention, but he also knows how to stay out from under your feet when the fishing gets hot.

We had a few nibbles out there, but only managed to land one 39 pound halibut on our trip. But that gave us 16 pounds of delicious filets, so we were happy campers. We had a great time on our trip, and the next time we’re in the Crescent City area, we’ll make a point of going fishing with John again. And if you find yourself in the great northern redwoods of California sometime, and are looking to wet a line, we think you will enjoy a trip with John, too.