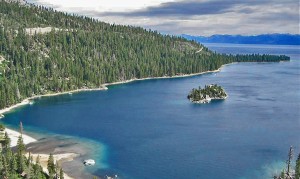 I read in the Los Angeles Times last Tuesday about a diver’s remains found in Lake Tahoe. After 17 years the well preserved body was discovered by a group of divers using mixed gas technology.  The body was lying on a shelf in 265 feet of water on the west side of the lake near Rubicon Point.  As I pondered this tragedy I was reminded of my first dive in Tahoe in 1984. It could have ended up in the same way.

I was camping at Emerald Bay State Park, and scoping out the beach there to plan a freshwater dive experience for my Advanced Scuba Class at the time. It was a warm sunny morning when I slipped into the water and snorkeled out to hover above the drop off about 80 feet offshore. The water wasn’t all that cold on the surface, and the visibility was excellent, exceeding 100 feet. When I switched to my regulator and dropped down, things changed immediately.

There was a thermocline at 15 feet where the water temperature plunged to 34 degrees. It
was a rapid 20 plus degree switch, with sun-warmed water floating atop winter-chilled icy depths. That got my attention, but I continued down to the sandy bottom above the drop off at a depth of about 30 feet. There wasn’t a whole lot to see as I worked along the top of the ledge while peering down into the clear blue water fronting the steep cliff that made up the drop off. A couple of crawdads, a few small trout, and a lure or two lost by fishermen was all I saw.

About ten minutes into the dive I noticed something white abutting a ledge just below me.  Curious, I descended to see what it was. The object turned out to be a small fiberglass skiff with the transom missing. Whoa, treasure! I was sure there was an outboard engine a little further below.  Before checking that out I looked at my depth gauge. It read 162 feet of water, and I had to be deeper since the gauge was calibrated for salt water. I’d been  deceptively fooled by the clarity of the water into thinking I was much shallower.

Even after inflating my buoyancy compensator I still had to use my hands while ascending back up the cliff to shallower water. I was well aware that I had exceeded my no-decompression bottom time, especially since that was significantly decreased at an altitude of over 5,000 feet. I was fortunate because I still had half a tank of air to use chasing crawdads in 20 and then 10 feet of water while decompressing. That was a close call, and one I hadn’t planned on, but I should have.

What I learned that day was a respect for the lake, and for diving under new rules at altitude in a different freshwater habitat. This experience made for a good teaching lesson to pass on to my advanced class. Tahoe is a beautiful place, and diving there is enjoyable if you take the time to plan ahead, and if you stay conservative. I’ve since enjoyed a number of dives around that area, and in other freshwater lakes as well. You can do the same thing, but don’t go unprepared as I did on my first dive in Tahoe. Whether it’s a lake, a stream, a quarry, or the ocean, you need answers before you put yourself on the line. Dive safe, and have fun, that’s what it’s all about.

Otto Gasser grew up mostly in southern California and obtained his Doctorate In Educational Psychology from the University of California at Los Angeles (UCLA). He was hired as a professor to teach in the Department of Kinesiology and Health Sciences at California State Polytechnic University, Pomona, California, where he initiated a multilevel Scuba training curriculum on campus. Dr. Gasser spent 37 years at Cal Poly before recently retiring. During that time, he certified over 2,000 students in Scuba. He served as the University’s Diving Safety Officer and represented the campus on the California State College and Universities Diving Safety Committee. Off campus, Dr. Gasser spent ten years on the Board of Directors for the Los Angeles County Underwater Instructors Association, three of them as President. Over the years, he has volunteered time on a number of county Scuba training programs and has authored several articles about diver training. Otto is now an active recreational diver. In addition to the California coast, his more frequently visited dive locations include Hawaii’s Big Island, Indonesia, and the Caribbean islands.
View all posts by Otto →
This entry was posted in Freshwater Diving and tagged altitude diving, freshwater diving, Lake Tahoe diving, northern California diving. Bookmark the permalink.