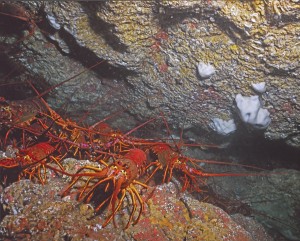 In our last post I talked about the wreck of the Winfield Scott, a dive I often used with my basic students. Just down the island at Landing Cove there’s another site where I took my advanced class for a relatively safe cave diving experience. The Anacapa Island Lobster Cave is also another location I used in my first book, Sunken Dreams. My students loved this dive, and maybe you will, too. One caution though: it’s within the boundaries of Anacapa Island’s special closures, and it’s in a strictly no-take-anything zone. Before diving here you should go on line and check the Department of Fish and Game’s website we cited in the last blog to be sure this dive location is still available for your enjoyment.

Landing Cove is located on the east facing south end of the island near the arch and below the lighthouse perched atop the cliff there. I’ve posted a brief chart below to help you find the entry to the cave. It’s not an exposed-on-the-surface cave mouth, rather the entry is underwater. There is a crevasse in the cliff just above the entrance to the cave that marks the spot, but you have to know what to look for to find it. The depth at the entry point varies from 15 to 20 feet of water depending on the tide.

Once you’re inside the cave there are no major branches off the main passageway. Unless something has changed since I was last there, you’ll find a straight swim of about 100 feet long that gradually shallows and ends on a rocky beach in a small dry room where you can exit the water. If you want, you can sit for awhile and talk about things with your buddy, or explore the back reaches of the room’s walls.  Once inside the cave there’s air on the surface too, if you want to surface and get your bearings before continuing the dive. That also nullifies falling silt from your bubbles that often gets disturbed in other settings.

The major marine life in the cave consists of lobsters than hide in the dark along the walls, and that’s why it’s called Lobster Cave. At times, especially in winter months, there can be hundreds of these critters crawling around inside there. It’s a great look-but-don’t-touch experience, and that adds to the eerie underwater setting inside the cave. I have seen a moray or two inside here too, but not on a regular basis. I’ve also found some interesting nudibranchs just inside the mouth of the cave that can be quite photogenic. Again, this is a no-take-anything zone, so don’t get carried away by the sight of the bugs. Use neutral buoyancy, and adjust that as the water gets shallower. Don’t touch the animals, and use a light kick with your fins. If you do that the bugs won’t be spooked and you can watch and enjoy their presence as you go by.

The area outside of the cave isn’t nearly as interesting. You can continue along the cliff north to the island’s landing cove, or work south through a shallow passage to the end of the island. There’s a nice sandy area there that often has bat rays, halibut, and other critters to enjoy.

Other caves on the island are not as safe to enter and require special knowledge and training. A word of caution, more than one person has gotten lost and died in caves at the Channel Islands. Dive safe! If you’re not sure about the circumstances, or your ability to successfully handle them, don’t cave dive.

Let me end with a brief experience I had early on in my diving career. My buddy and I entered a shallow cave near the middle of Santa Cruz Island to try catching lobster. As we went deeper into the cave there were bugs everywhere. We were caught up grabbing them as they tried to flee from our reach. There were so many they were bouncing off our bodies in their frenzy to escape. We quickly limited out and turned to exit with our catch. There was zero visibility behind us blocking the route out of the cave.  This was caused by our fins and our bubbles rising to disturb the silt on the ceiling of the cave. We were getting low on air, and we sure hadn’t paid much attention to possible side tunnels that could lead us astray. Neither had we used a safety line to show us the way out.  Stupid, yes, we’d been caught up in bug fever. Fortunately for us the cave was straight forward with no blind passageways and we exited fairly easily. In hindsight though, we were dumb, and it had been a scary experience. Whenever I think back to that day, and relive the scene, I realize that a limit of lobsters isn’t worth dying over. Think about that before you go cave diving, and think about always being prepared before trying to do it in the dark.

Otto Gasser grew up mostly in southern California and obtained his Doctorate In Educational Psychology from the University of California at Los Angeles (UCLA). He was hired as a professor to teach in the Department of Kinesiology and Health Sciences at California State Polytechnic University, Pomona, California, where he initiated a multilevel Scuba training curriculum on campus. Dr. Gasser spent 37 years at Cal Poly before recently retiring. During that time, he certified over 2,000 students in Scuba. He served as the University’s Diving Safety Officer and represented the campus on the California State College and Universities Diving Safety Committee. Off campus, Dr. Gasser spent ten years on the Board of Directors for the Los Angeles County Underwater Instructors Association, three of them as President. Over the years, he has volunteered time on a number of county Scuba training programs and has authored several articles about diver training. Otto is now an active recreational diver. In addition to the California coast, his more frequently visited dive locations include Hawaii’s Big Island, Indonesia, and the Caribbean islands.
View all posts by Otto →
This entry was posted in Cave Diving, Other Southern California Dive Spots and tagged Anacapa Island, cave diving, lobster, scuba diving, southern california diving. Bookmark the permalink.