Rock Scallops on the Star of Scotland 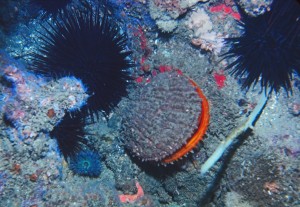 In a blog on November 11, 2011, I discussed the location of the wreck of the Star of Scotland in the middle of Santa Monica Bay, and that blog can be referenced along with other past blogs of interest for the information they contain. One thing I didn’t emphasize at that time is that this a great place to find rock scallops. They grow in abundance all over the wreck, and you can almost count on taking a limit of these tasty creatures. The size varies with how many divers have been visiting the wreck recently, but usually you’ll be happy with your catch.

Looking for scallops can be an adventure. It’s easiest if you can spot them before they sense your presence and close up, becoming almost indistinguishable with the landscape. I liken them to orange or black smiles pasted among all the other things growing on the reef or wreck. Once spotted you can use a gloved hand to delineate their size and shape and plan where to insert your iron to pry them loose. Be selective, unless the scallop is at least as big as your fist there won’t be all that much meat inside.  Leave the little ones to mature, and then you can collect them when they’re bigger next year. No, I don’t know of any difference between orange- or black-lipped specimens. There may be one, but to me they’re both equally tasty to eat.

The scallops found on wrecks are easier to knock off the encrusted rusty metal plates than they are when more firmly attached to rocky ledges. You can often whack them hard on top with an iron and they’ll drop into your hand. The metal doesn’t seem to affect the taste either, and I’ve often enjoyed frying these guys in butter or chopping them up for a seafood chowder. 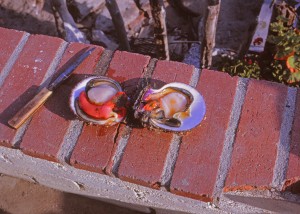 One thing I should mention: If a game warden checks your catch they’ll count each piece of scallop as one animal. You need to be careful if you elect to clean your catch on board. Use a thin bladed knife and slide it into the hole alongside the hinge, scrapping the muscle meat away next to the shell. Then, when the shell opens you can free the other side and you’ll end up with one chunk of meat per scallop. If you cut the muscle in the middle and then scrape it off the shell you’ll end up with two chunks of meat per scallop, and even though you only took a legal limit it will look like you exceeded your quota and you might be cited.

Another interesting phenomenon about collecting scallops here is that when you pry or knock them off you’ll draw a host of hungry scavengers after the worms and other goodies that also drop off. Garibaldi, sand bass, perch, sheepshead, and a variety of rockfish of varying size will suddenly be your friends. All-in-all, it’s always a fun dive, and if you do try it, I’ll bet you like it.

Otto Gasser grew up mostly in southern California and obtained his Doctorate In Educational Psychology from the University of California at Los Angeles (UCLA). He was hired as a professor to teach in the Department of Kinesiology and Health Sciences at California State Polytechnic University, Pomona, California, where he initiated a multilevel Scuba training curriculum on campus. Dr. Gasser spent 37 years at Cal Poly before recently retiring. During that time, he certified over 2,000 students in Scuba. He served as the University’s Diving Safety Officer and represented the campus on the California State College and Universities Diving Safety Committee. Off campus, Dr. Gasser spent ten years on the Board of Directors for the Los Angeles County Underwater Instructors Association, three of them as President. Over the years, he has volunteered time on a number of county Scuba training programs and has authored several articles about diver training. Otto is now an active recreational diver. In addition to the California coast, his more frequently visited dive locations include Hawaii’s Big Island, Indonesia, and the Caribbean islands.
View all posts by Otto →
This entry was posted in Santa Monica Bay Dive Spots, Wrecks and tagged santa monica bay, scallops, scuba diving, southern california diving, wreck diving. Bookmark the permalink.