A King of a Fishing Trip 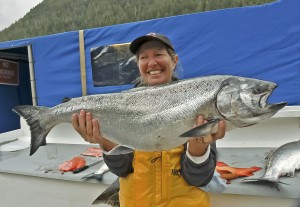 Pam and her Tyee

My wife, Pam De Vries, who coauthored this blog with me, got tired of me sitting around the house in a blue funk after my hip replacement operation a year ago February, so she decided to take me salmon fishing. After a careful search on the internet, she decided that a trip out of Queen Charlotte Islands (also called Haida Gwaii) aboard the MV Salmon Seeker was the place to go. No matter that I was just out of my walker and the trip was billed as an “extreme experience in fishing,” she instinctively knew it would be my kind of fishing. As it turned out, she was right.  We had a great time, it wasn’t all that extreme, and this blog is our recommendation for you to consider something similar for yourself. 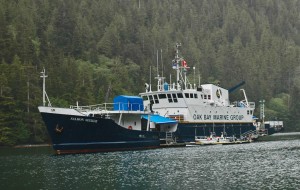 The Salmon Seeker at anchor

The Salmon Seeker is one of several packaged trips sponsored by the Oak Bay Marine Group, and you can go online and get information directly from their website at www.mvsalmonseeker.com/.  They also offer seasonal specials, and you can inquire about those by email or phone. We opted for a 5-day, 4-night fly-in package. The price of the trip covered almost everything, but to start the trip you have to get to Vancouver, British Columbia on your own. We were flying out of Los Angeles, so we opted to arrive a day early and stay one night at the Sheraton in Vancouver so we’d be ready to start our adventure early the next morning. The trip booking agent at Oak Bay Marine helped with those reservations at a special rate, and several other options were also available. We also spent the night at the same hotel on the return end, and that was very convenient for us.  The hotel even kept our frozen boxes of fish in their freezer as an accommodation, so the one day layover wasn’t a problem.

The trip started aboard a special chartered flight early the morning after we arrived in Vancouver. When you arrive at the Vancouver charter airport terminal, you can purchase an appropriate Canadian Fishing License at the desk. Ours cost $31 each, and that covered fairly generous take limits of two king salmon per day each, maximum of four each for the trip; one halibut per day with a maximum of two each for the trip; and four coho or chum salmon per day, maximum eight each for the trip.  That’s a lot of fish. Other take limits can be found at the Fishery and Oceans Canada website (http://www.dfo-mpo.gc.ca/ ) if you’re interested in ling cod or rockfish. Personal luggage was limited to 25 pounds each, but this wasn’t a problem because they furnish the heavy stuff like rain gear and boots on the boat.

The charter flight was a prop job that flew from Vancouver to Sandspit Airport on Queen Charlotte Island in just under two hours. There, we were met by a bus that transported us to a nearby float plane operation, and then it was a 20 minute scenic flight to the Kano Inlet on the west (ocean) side of the island. We landed on the water next to the MV Salmon Seeker about noontime where we were shown our cabins, fed a delicious lunch, and given our first orientation.

The Salmon Seeker serves as the mother ship for the trip. It’s securely anchored deep in Kano Inlet in a wilderness setting, and the water stayed calm during the entirety of our stay.  Accommodations are small, comfortable cabins with shared restroom and shower facilities. The food was a highlight, and we both gained weight in spite of a busy fishing schedule. Breakfast was served from sunrise to 9am, and you could choose to order or serve yourself from a generous continental spread. Lunch was a sit down affair when we arrived, but after that you pack your own for the boat from a selection of sandwiches and snack foods laid out before you leave. Dinner was also a sit down affair, but casual dress, and the food was marvelous. There was always soup, hors d’oeuvres, a dessert and other special side dishes to go with the main entrée. While we were there the entrees included steak, chicken, roast pork, and duck. You can also purchase beer or other alcoholic beverages on board if desired. The Captain gives a nightly briefing before dinner to prep you for the next day. 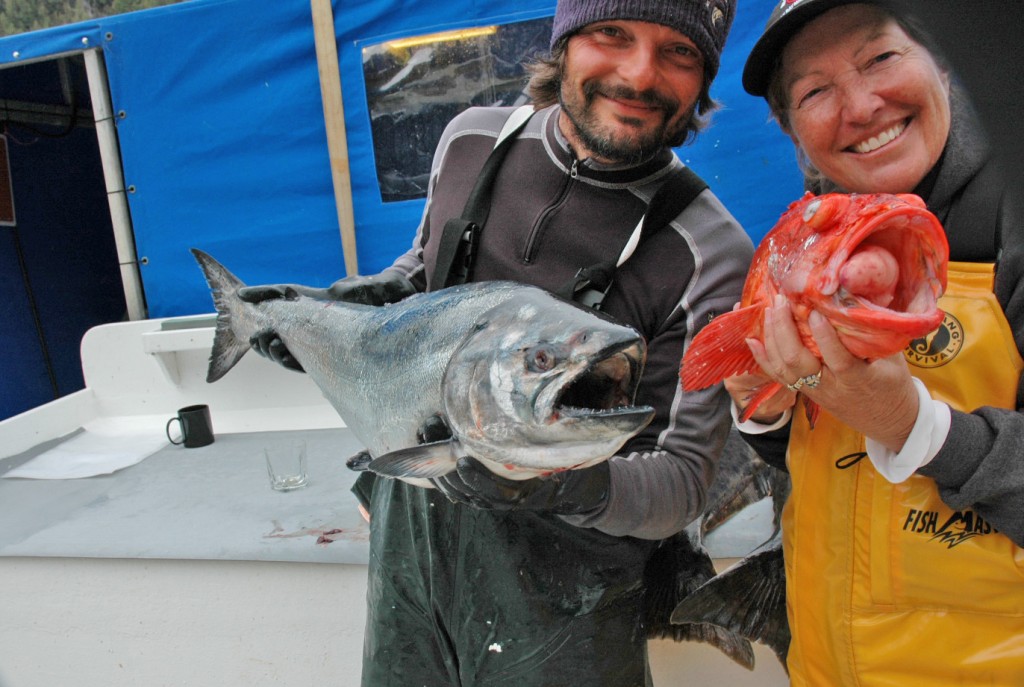 Our fishing platform was one of a fleet of 20-foot Boston Whalers powered by 150 horsepower Yamaha engines. Each boat had a personal guide and was limited to two fishermen per boat. Our guide was named Doug, and he was great.  Doug was very knowledgeable, and willing to help whenever necessary. I was still a little gimpy, and Pam had trouble getting the rod with a hooked fish out of its holder, but Doug made things easy for us, and we appreciated his help. We told him what we wanted to target each day, and he took it from there. 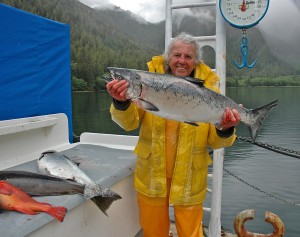 Otto and a King

And we weren’t disappointed.  The Salmon Seeker’s website claims that 97 percent of guests limit out.  I was skeptical at the beginning of the trip, but not now.  Your fishing day begins after breakfast and covers a 10-hour span. All equipment is furnished, and ours was top of the line. Trolling involves a flasher connected to the downrigger (not directly to the line) so that once a fish is hooked, you have a live fish to fight with nothing but the drag of a thin line to slow him down. At the end of the day you can retire to the lounge to sip whatever you like and eat specially prepared snacks before dinner. Meanwhile your guide filets and vacuum packs your catch for you, and eventually it ends up in waxed boxes of about 50 pounds each for you take with you on the trip home.

The biggest king salmon taken on our trip was over 40 pounds, and the biggest halibut was 240 pounds, caught by a little lady from southern California who was also treating her husband to a fishing trip.  We limited out in kings and halibut, and we also took a number of cohos to fill three boxes with 150 pounds of prime fish.  Naturally Pam caught the biggest salmon, a 31 pound tyee that she fought for a good half hour before landing the monster.  A king salmon over 30 pounds is given the distinction of ‘tyee’, and Pam got special recognition for her catch with a pin for her fishing hat and her name emblazoned on a plaque in the ship’s lounge.  I figured that must have been her reward for getting me out of the house on this special trip, because there’s no other reason she could out fish me, is there?

This trip turned out to be the highlight of our summer, and we plan to go back again in 2012.  We’d go again this year, but the freezer is still half full of fish.  We had such a good time we wanted to let you know that fishing adventures like this are out there to be enjoyed by one and all.  If you book your own adventure this summer we hope it turns out as great as ours.

Otto Gasser grew up mostly in southern California and obtained his Doctorate In Educational Psychology from the University of California at Los Angeles (UCLA). He was hired as a professor to teach in the Department of Kinesiology and Health Sciences at California State Polytechnic University, Pomona, California, where he initiated a multilevel Scuba training curriculum on campus. Dr. Gasser spent 37 years at Cal Poly before recently retiring. During that time, he certified over 2,000 students in Scuba. He served as the University’s Diving Safety Officer and represented the campus on the California State College and Universities Diving Safety Committee. Off campus, Dr. Gasser spent ten years on the Board of Directors for the Los Angeles County Underwater Instructors Association, three of them as President. Over the years, he has volunteered time on a number of county Scuba training programs and has authored several articles about diver training. Otto is now an active recreational diver. In addition to the California coast, his more frequently visited dive locations include Hawaii’s Big Island, Indonesia, and the Caribbean islands.
View all posts by Otto →
This entry was posted in Salt Water Fishing and tagged halibut, salmon. Bookmark the permalink.