Anacapa Island: The Wreck of the Winfield Scott

I’ve spent a lot of time on and under the water over the years and enjoyed some great times doing it, and I’ve had some great seafood meals along the way, too. The next series of blogs is devoted to reviewing some of those adventures and some of the things I learned while enjoying them. They’re presented in no particular order or importance, just some spots I enjoyed for a variety of reasons, and maybe you’d like to enjoy them, too.

Diving the Wreck of the Winfield Scott 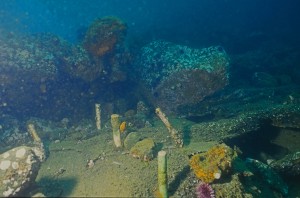 I often took my beginning student divers to the wreck of the Winfield Scott for their check-out dive because it’s a safe and interesting spot for new divers to become acquainted with blowing bubbles in a scenic, non-threatening environment. This is also a site I’ve often used to have students practice underwater navigation. It’s a fun dive area that everyone can enjoy, and I recommend it as long as you’re not out after game. I’ve included a rough map of the area to give you some ideas for planning your dive if you elect to visit here. 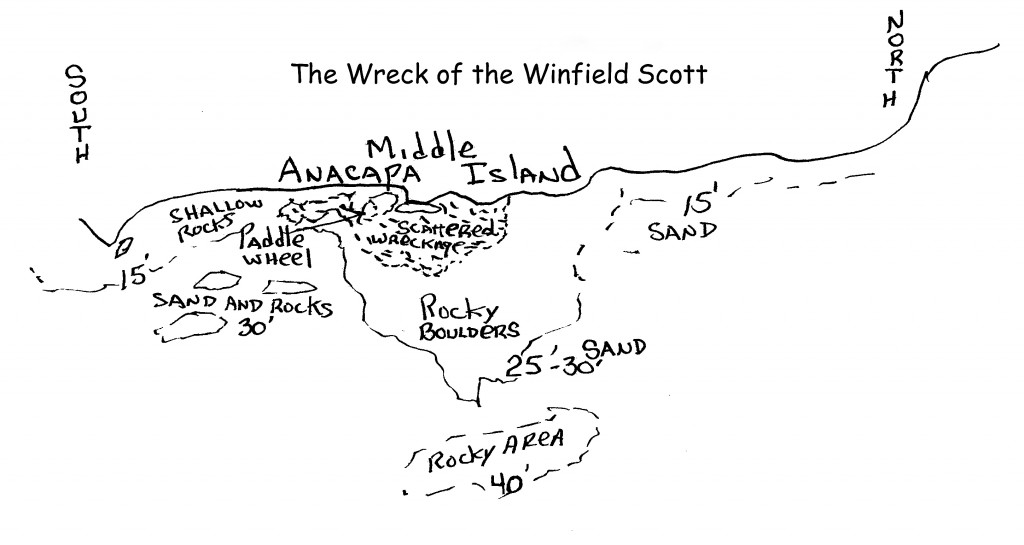 Nowadays, areas surrounding all of the Channel Islands are covered by The Marine Life Protection Act, including the location of the Winfield Scott. These rules and regulations are complicated, but well spelled out. You can access them on the web through the California Department of Fish and Game at http://www.dfg.ca.gov/mlpa/maps.asp.

You can also go online and check out the interesting and well documented history of this wreck from a number of reliable sources, and I recommend you do so before you dive this area. With some historic background, it’ll make it much more interesting when you explore this historic dive site.

The Winfield Scott ran aground in December of 1853, stranding itself on a rocky outcropping on the east facing side of Middle Anacapa Island. The remains of this once proud, 225-foot-long, side-wheel passenger steamer are strewn over about an acre of ground along the bottom around a large rock in water as shallow as 10 feet and extending parallel to shore and out seaward into slightly deeper water. The remains don’t look like one would imagine a shipwreck would; rather they’re more like a scattering of rusting iron machinery and compressed copper decking that’s been battered into its shallow water resting place by countless storms over the years. The only piece of wreckage that stands out is a shaft and paddle wheel usually covered by kelp. Still, it’s a fun dive. Coordinates for the main part of the wreck are 34.0095 N and 119.3875 W.

The survivors of the Winfield Scott were successfully rescued, and stories were published about its lost cargo that included a large amount of gold bullion. That led to a number of salvage operations that had limited success. When I first started diving here, divers used to pick through the wreck looking for things like pieces of the copper deck or the square-formed nails that held that deck in place. There was even a comical home movie made depicting divers searching for gold coins amidst the wreckage. Now the wreck is under the jurisdiction of the National Park Service, and it’s also listed in the National Registry of Sunken Ships. That puts it under the protection of antiquity laws, so collecting anything here is strictly illegal. However, you can still visit the remains of this ship, you just can’t take souvenirs, only pictures.

I love diving here with beginner and novice divers, photographers, and people just interested in looking at the varied underwater scenery. If you have just a little background information, it’s easy to conjure up all kinds of sea stories to pique someone’s interest. That’s fun, and some of the stories you can tell might even be true.

Otto Gasser grew up mostly in southern California and obtained his Doctorate In Educational Psychology from the University of California at Los Angeles (UCLA). He was hired as a professor to teach in the Department of Kinesiology and Health Sciences at California State Polytechnic University, Pomona, California, where he initiated a multilevel Scuba training curriculum on campus. Dr. Gasser spent 37 years at Cal Poly before recently retiring. During that time, he certified over 2,000 students in Scuba. He served as the University’s Diving Safety Officer and represented the campus on the California State College and Universities Diving Safety Committee. Off campus, Dr. Gasser spent ten years on the Board of Directors for the Los Angeles County Underwater Instructors Association, three of them as President. Over the years, he has volunteered time on a number of county Scuba training programs and has authored several articles about diver training. Otto is now an active recreational diver. In addition to the California coast, his more frequently visited dive locations include Hawaii’s Big Island, Indonesia, and the Caribbean islands.
View all posts by Otto →
This entry was posted in Other Southern California Dive Spots, Wrecks and tagged Anacapa Island, southern california diving, wreck diving. Bookmark the permalink.